But once inventions were a dream come true for every inventor who spent years on a project, or even decades. The French have made a tremendous contribution to the history of magnificent and timeless inventions!

For the rest of society, novelties that used to happen not a dozen a month, as now, but much less often and, accordingly, more global – inventions became the subject of close attention and controversy, admiration, or vice versa – ridicule. The current innovations will become obsolete next year, while some inventions of the distant past are very relevant to this day.

Mayonnaise was invented by French soldiers

One of the French culinary masterpieces that arose, one might say by accident. Why frog legs and onion soup took root in France at one time – the French just had to switch to pasture, due to a strong lack of food due to the hundred-year war with England.

Almost the same situation happened on the eve of the invention of the world’s most famous sauce – mayonnaise. And it happened in 1758 in the city of Mahon on the Spanish island of Menorca. What does the French have to do with it? And despite the fact that the city was conquered by the Duke of Richelieu with French soldiers, and then the city was besieged by the British. At some point, all the soldiers were left with were eggs and olive oil.

What can you cook from such a meager set? Scrambled eggs and scrambled eggs! This is what the cooks did, until the soldiers mutinied and the Duke of Richelieu demanded at least some variety! There was a creative friend who beat an egg with butter and added spices.

Now no one will remember his last name, but his work, as they say, lives on!

The name according to various versions comes either from the name of the city of Mahon (Maonian), or from the word yolk (moyeu) in Old French.

Scuba – an invention of French engineers

The very first something similar to a device for breathing underwater appeared back in 1866. Mining engineer Benoit Rouqueirol invented a device for cleaning air in mines: the device consisted of a compressed air cylinder and a hose.

Then Auguste Deneirouz adapted this device for breathing under water, and later the science fiction writer Jules Verne described it in his novel “Twenty Thousand Leagues Under the Sea”. Then it really looked more like fantasy.

Henry Fluss was the first to create a successful apparatus using this circuit and tested it underwater in 1878. But new nuances arose: it turned out that oxygen at a depth of 20 m was becoming toxic.

It took many more years, trial and error, and various improvements before Jacques-Yves Cousteau and Emile Gagnan created a safe and effective device for breathing underwater in 1943 and called it scuba diving.

In total, the French have worked for 77 years so that we can now look at the fish at depth.

Although, of course, scuba diving is also used for serious research, now you can dive with it to incredible depths and spend quite a long time there. For which many thanks to Jacques Cousteau!

Braille – a blind Frenchman invents an alternative way of reading

Yes, Louis Braille is the inventor of the famous unique font for the blind, also French.

He was born at the beginning of the nineteenth century (in 1809) in the family of a craftsman in the town of Couvre. The boy went blind at the age of three due to inflammation of the eyes. Then at the age of 10 he was sent to the Royal School for the Blind, where he learned to play the piano and organ.

This played an important role in the future, when twenty-year-old Braille created the relief-point type: in addition to letters, Braille also invented notation to teach music to blind people.

Chandelier – the French invented what is in every home

The chandelier, as a source of shadowless lighting, was invented in France in the 17th century.

Initially, such lamps were exclusively made of crystal. However, later this word began to be applied in general to all ceiling lamps. In addition, there were added “reflectors” made of metal plates polished to a shine, which were attached to the walls, and candles were installed on them. It was customary to decorate these reflectors with the master’s emblems and monograms.

The French continue to invent unique things even now. For example, in 2012, an installation was installed in Paris – the concept of a trampoline bridge that would connect the fifteenth arrondissement of Paris and the eastern part of Swan Island.

It was installed exactly next to the Bir-Hakeim two-tiered bridge, as if the past and the future were competing with each other.

But the French scientists presented the Skylights Theater – an excellent apparatus for the complete feeling of isolation on an airplane. It consists of headphones combined with a kind of glasses. They weigh (glasses) only 280 g, the battery is designed for eight hours of continuous viewing, the memory can hold up to 40 movies in HD quality. The device has already been tested: the low-cost airline XL Airways offered it to its passengers on flights to the Antilles. The passengers were delighted! 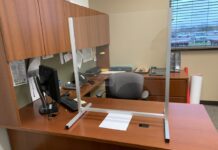 Cannot Deny The Importance Of Sneeze Guards For Desks These Days

3 Signs Your Grease Traps Are Not Cleaned Regularly

Maria Farnham - December 5, 2021
Grease traps are an integral part of many restaurants and homes around the world. Residues of grease from your dishes, oil or solids that your...

Roof Repairs You Should Always Leave to the Professionals

Canvas and Decor: Get Design Inspiration for Every Room

Where Can I Find Trusted CBD Oil Reviews?

How to Use Vashikaran and Astrology to Resolve your Health Problems?

3 Mistakes to Avoid When Replacing a Grease Trap

10 Tips for Choosing an Estate Agent to Sell Your House...

Tips for Understanding the Process of Coffee Production