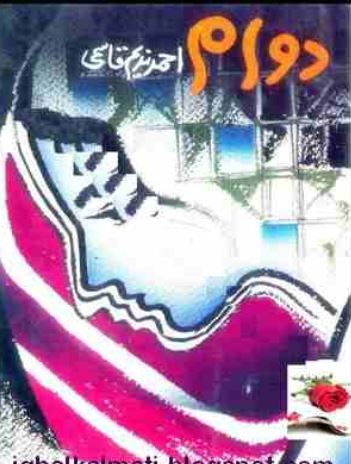 Dawam by Ahmad Nadeem Qasmi is a collection of ghazals. Qasmi was a very famous and influential poet. His way of expressing feeling was awesome. In these ghazals, he has written on Ishq and love. The beauty of love and the feeling of being beloved are just amazing. Also, these poems define the condition of our society. There are some spiritual ghazals also. Ahmad Nadeem Qasmi was a progressive writer.

His poems and ghazals have a message of hope and willingness to do something. I think this is a very good sign. The beauty of a good poet is he doesn’t inhale or exhale depression and hopelessness. Ahmad Nadeem Qasmi was born on 20 November 1916. He was a famous Pakistani short story writer, playwriter, journalist, poet, editor, and critic. Qasmi’s services in Urdu literature are unforgettable.

He was the writer of more than 60 books on different topics such as journalism, short story, poetry, fiction, criticism, and biographies. He had completed his M.A from Punjab University Lahore. First appointed as an assistant at the general secretary’s office. He was inspired by Saadat Hassan Manto which was a great short story writer at that time. Qasmi and Manto was a good friend.

After that in 1946, he started working with Syed Imtiaz Ali Taj as editor of his magazines Phool and Tehzeeb e Nuswaan. Qasmi was an active member of the progressive writer’s movement. Also, he started to publish his own monthly magazine named “Funoon”. His famous books are Anchal, Ablay, kappas ka Phool. He died in July 2006 in Lahore.